A Glimpse of Heaven

Dead for 28 minutes, she caught a beautiful glimpse of heaven.

Doctors inexplicably missed a burst appendix, which led to her untimely death in a hospital bed at age 27. But she shocked her doctors and nurses when she abruptly sat up and began to tell stories about a visit to heaven.

"I had never been sick in my life," Betty Malz recalled, at a conference hosted by Hospital Christian Fellowship in the Midwest. She was only 24 hours into a Florida vacation with her family when she noticed a pain in her side.

At first, she thought she pulled a muscle water skiing or the pain came from her terrible sunburn. But about 11 p.m., after everyone else fell asleep, she began to vomit.

She nudged her husband John in bed. "I've got to get some help," she told him. "I'm very seriously sick."

About three miles away, they found a small hospital. After a few tests, an intern came back shaking his head. "We're in a lot of trouble here," he informed them. "You have an appendix swollen and ready to burst. I have 26 patients and 24 beds, with two patients in labor ready to have babies at the same time. We're not equipped for this emergency."

An ambulance transported Betty to a larger hospital in Clearwater, but no one realized her appendix burst during the trip.

After she arrived, a doctor disagreed with the first doctor's report. "You aren't even swollen on your right side," he noted. "You just got too much sun. We will treat you with some antibiotics, put you on a liquid diet, and you'll be on the beach in a few days."

After five days, Betty's health continued to decline. After 11 days, she was blind, had a fever of 105 degrees, and toxic poisoning had spread throughout her body.

A new specialist came in who mistakenly informed the family she had a tubular pregnancy, and recommended surgery to remove what he thought was a four-month-old dead fetus.

Deeply discouraged, Betty's family decided instead to fly her to Union Hospital, close to their home in Terre Haute, Indiana. After Betty arrived there, doctors performed surgery for her supposed tubular pregnancy, but were shocked when they got inside.

"I've found a mass of gangrene the size of a man's head," her surgeon told her husband and parents in ICU. "This is the nastiest mess in my 28 years of practice. The first intern was right. It was a ruptured appendix 11 days ago. She has a serious bowel blockage and all her organs have started to disintegrate."

"I don't know how a 120 pound woman has lasted for 11 days," he added. He told them she had a slim chance of survival. 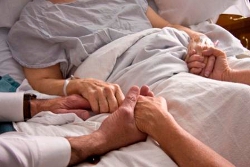 Shortly after his dismal news, Betty lapsed into a coma that lasted 44 days. "I didn't know a person in a coma could pray, but I prayed," Betty recalled. She was also very aware of the people who visited her in the room and what they said.

The daughter of an Assemblies of God pastor, Betty received Jesus as her Lord and Savior when she was 13. She had little interaction, however, with other churches and admitted to harboring some prejudice toward them.

"I had a Catholic priest and a Catholic sister that were born again Christians who sat and prayed with me," Betty said. "I didn't know that Catholics walked that close to the Lord. I was wonderfully surprised, because I felt God's presence when they prayed for me."

Betty's condition continued to worsen. She stopped breathing twice and doctors revived her. Then she contracted pneumonia and her lungs began to fill with fluid. Doctors informed her family that she was not expected to live, and a steady stream of family and friends came in to say their goodbyes.

"I began to struggle for breath," Betty recalled. "I prayed, "˜Oh Lord, send somebody to help me."

Immediately after her prayer, she heard a man's footsteps. "I heard the pages of a Bible being turned and the voice of a man I never liked. I couldn't stand Art."

Her unwelcome visitor read from Psalm 107. "He sent his word, and healed them, and delivered them from their destructions."

The power of God's Word brought a "little fountain of faith" that sprang up in her soul. It was the first glimmer of hope that she might be healed.

Not long after Art left the room, Betty breathed her last lungful of air. Doctors declared her dead and her body was covered by a sheet as her family grieved.

A Glimpse of Heaven

But during the next 28 minutes Betty experienced something far removed from grief. The sensation in her body at the point of death she compared to a thrill ride at Disneyland, when a rollercoaster crests over a peak. 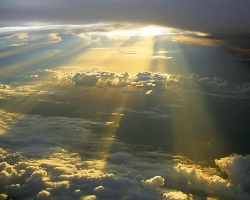 "Suddenly I realized I was launched into another country, another planet. It was as real as England or America," she recalled.

"I began to walk through a meadow of waving green grass with flowers and colors I had never seen here."

Betty saw family members and acquaintances that preceded her in death, including her little brother. "I saw a man who had fallen from a train and had both legs amputated. He was playing in a meadow with animals and children and he had both his legs."

As she walked up a hill, she realized all her pain was gone and a seven-foot-tall angel walked beside her. "I realized he had been with me all my life, since age 13 when I received Jesus. He had been guarding and protecting me." They communicated with each other without speaking.

She heard marvelous music and began to sing along. While she never had a very good singing voice on earth, her voice in heaven was surprisingly "high and sweet." She stopped singing abruptly when she recognized the voice of a deceased Gospel singer enjoyed by her family. "I've been born again and the old account was settled long ago," he sang, to her amazement.

As Betty approached a large gate, an angel stepped forward and touched it. The gate swung open and she beheld a dazzling golden light. The light seemed to shine through her body and provided warmth. As she looked down, she saw new pink skin had formed over her surgical incisions.

The bright light emanated from the throne room of God. "Jesus was at the right hand of the Father in a majestic golden throne room," she said. "The light reflected on a golden boulevard down the center of the city. I realized the light in that throne room was the source of all energy and power and life." 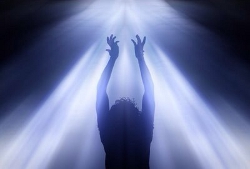 She was amazed by something that resembled the Northern Lights or airport beacons. "These were prayers ascending from the earth," she noted. "They were ascending like laser beams, going directly to the light in the throne room."

On one shaft of light, she recognized her father's voice. "I looked down and saw my father weeping in the hospital room." She recognized her own body, covered by a sheet, and her bed pulled closer to the door.

He was so heartbroken, he could only offer a one-word prayer: "Jesus" In his crisis of desperation, pain and grief, there was nothing else he could utter. He wanted his daughter back.

Betty said she never wanted to leave the glory of heaven, but after her father's one-word prayer, she began to travel faster than a jet plane back down toward the roof of the hospital.

"I saw the morning sun coming up, shining on all the church steeples in our hometown."

Carried with the rays of the morning sun, she saw pulsating ivory letters, about two inches tall, coming through the window of her hospital room like a stock market ticker tape. "They were going into my body through the sheet," she noted.

As Betty got closer to her body, she felt like she was at the end of a descending elevator ride. She felt a little jerk, like an elevator when it reaches the ground floor, and she slid back into her body.

She read the ivory letters, which were the words of Jesus recorded in the Book of John. "I am the resurrection and the life; he that believeth in me, though he were dead, yet shall he live. And whoever liveth and believeth in me shall never die."

As she touched the Word, life went into her fingers, arms, into her entire body. Abruptly she sat up in bed. The sheet that covered her body fluttered to the floor. "When I sat up I scared a whole room full of people." Her nurse's aide ran out the door, as if she saw a ghost.

"I'm five-foot twelve and I weighed 68 pounds," she recalled. "I had a green complexion, yellow eyes, and my hair had not been shampooed for nine weeks." As Betty looked across the room at her horrifying appearance in a mirror, for the first time in her life she didn't care about the way she looked.

"It was so wonderful to have a second chance to love people and to live again," she said. Her husband, parents and daughter, Brenda, rushed over and got on the bed with her, and began to squeeze and hug her.

Betty's doctor was very embarrassed by her Lazarus-like experience, because he had already signed the death certificate. Overwhelmed, he sat down privately with her for a heart-to-heart consultation.

"You were without oxygen for a long period of time," he said. "You had a bowel blockage and your organs started to disintegrate. We need to talk about mental and physical therapy." He suspected she had brain damage and he still wanted to perform a colostomy to provide a way for Betty to eliminate her foods. He warned her against discussing her trip to heaven.

After he left the room, one of the hospital staff mistakenly brought a full meal to her, which included two broiled pork chops, applesauce, cottage cheese, lemon cake, and tea. Betty devoured the entire meal in a matter of minutes.

Nurses were horrified by the mistake, and insisted they pump her stomach before her surgery, scheduled that day. Betty argued with them, insisting she was healed. 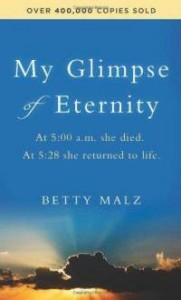 Betty's book describing her experience, "My Glimpse of Eternity"

Reluctantly, they took her into the bathroom, where she had a bowel movement.

The doctor returned to her room, amazed. "This is not possible," he exclaimed. "This can't happen!"

He pulled back the sheet to examine her incisions. He saw the fresh pink skin that began to form in the New Country. "I don't know where you went, but you came back well," he said, with a dazed expression on his face.

Betty's near-death experience and glimpse of eternity altered her thoughts on many subjects. "My religious and racial prejudice was gone," she said. "I found that in that place they didn't ask for a label or a passport or the name of your church."

"The only passport or visa to get in was Jesus, the Son of the Living God. I realized God loved all the churches where they exalt the name of Jesus."

"It was so wonderful to have a second chance to live again. I know what it will be like on the great resurrection morning to see loved ones. Every morning is like Easter at my house now."


The Webmaster
✞ Falling onto tough times AND new feature to site!!!
Our Lady of Zaro
✞ Message from Our Lady to Angela
Miscellaneous Messages
✞ What’s the Use?


Miscellaneous Messages
✞ Vision and Messages given to the Daughters of the Lamb
✞ "Brace Yourself"
Valeria Copponi
✞ Mary, Co-Redemptrix
Words and Dreams
✞ Peace will not be found among men
Pedro Regis
✞ Recent Messages from Our Lady