The Conversion of Bruno Cornacchiola

One of the most amazing stories of an atheist’s conversion to the Catholic Faith must surely be that of Bruno Cornacchiola, a violent man who hated with all his being everything to do with the Catholic Church, and had even vowed to murder the Pope!  Here is his story that I have adapted slightly from Marie Smith’s account in 2006:

Bruno Cornacchiola, though raised a Catholic, grew not only to detest everything Catholic, but also nursed a deep hatred for the Catholic Church and vowed action 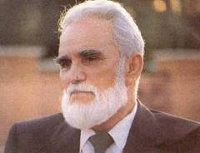 in order to bring Her down. Bruno’s hatred was not helped by the fact that he grew up poor and kept bad company with unruly boys of his own age. After receiving only a rudimentary education Bruno joined the military which seemed to suit his need for constant excitement and fed his need to hate someone or something. One would think that with such hatred eating at his very soul, Bruno would be a lost cause, but God, “Who desires all men to be saved and to come to the knowledge of the Truth” (1 Timothy 2)

Before this though, Bruno decided to go and fight in the Spanish civil war, though he had no particular ideology Bruno fought simply for the love of it. When he arrived in Spain Bruno met up with a Lutheran man who convinced Bruno that the Catholic Church was the cause of all the world evils and needed to be destroyed, most especially the Pontiff! These words fed Bruno’s already active hatred of all things Catholic, and he vowed then to one day kill the Pope! This was no empty threat for while in Spain Bruno bought a dagger in order to carry out this evil deed, his heart was indeed in the depths of darkness as his family also felt the wrath of this hate filled man. Bruno was not a good husband and constantly beat his wife, he also threw out any statues or other religious items from his home. The Cornacchiola household was certainly NOT a happy one, as his wife lived in fear everyday of her life and the children suffered as they themselves were beaten and witnessed their father’s violence towards their mother.

Due to his violent nature Bruno demanded that his wife leave the Catholic Church and join a protestant Church, under great duress Bruno’s wife did just that but only after she had applied conditions that Bruno would make the Nine Fridays devotion. Bruno scoffed at this ‘challenge’ and so did as his wife suggested, it had little 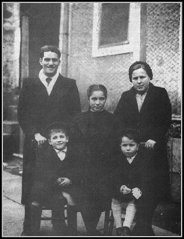 impact on this enraged man and so Iolanda left the Catholic Church and joined her husband in the new Protestant Church, though she was sorely grieved at taking this action.

Bruno eventually found a steady job as a tram conductor in Rome, but this brought no relief to the family as Bruno’s violence intensified against Iolanda and his children who had to deal with his abuse and drunkenness. Iolanda though did not give up hope and constantly prayed for the salvation of her husband and the well being of their children. This man’s heart was so full of hate that he soon became an avowed communist much to his wife’s distress.

One day while he was preparing an anti-Church and anti-Mary speech, Bruno took his children to the park where he sat and wrote notes on his speech as his children played ball. As Bruno prepared his notes he could hear his children gleefully playing together, this did not deter Bruno from his course.

It was only when the children cried out that they had lost their ball that Bruno with great irritation left his notes and began to help his children look for the missing ball. While Bruno and his children were searching for the ball Bruno could hear his son Gianfranco say over and over ‘oh beautiful lady, beautiful lady’. Very much in fear for his son Bruno searched for Gianfranco and found him kneeling transfixed before the small grotto, soon all three of Bruno’s children knelt in awe at the sight of this most beautiful lady. Bruno immediately tried to get his children away from the Grotto but to no avail, he as strong as he was could not lift his own little one’s. Finally Bruno yelled, ‘God help us!’ 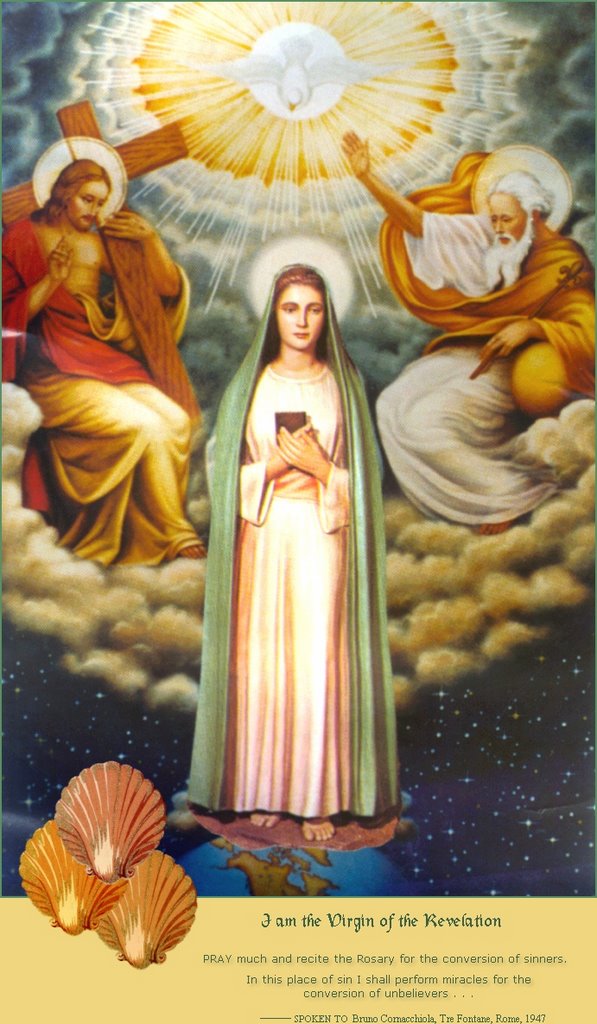 Our Lady of the Revelation at Tre Fontane

Upon yelling this out, Bruno could finally see what his children were seeing, as two hands reached out and touched his eyes he gradually saw before him the most beautiful woman he had ever seen. He also felt a swelling of great inner joy at the sight of his most gracious and lovely woman. Bruno like his children could not move or remove his eyes away from this glorious woman who was wearing a green mantle over a white dress with a rose sash tied at her waist. Her expression was one of deep sadness and Bruno felt immediate compunction over the sad look in her eyes, but still he could not tear his eyes away from such a sight as this most wondrous lady.

As Bruno took in this sight he also noticed that the beautiful and sad lady held a book in her hands which she cradled close to her heart and beneath her feet was a broken crucifix on top of a black cloth. Bruno could hardly believe what he was seeing but he could not move as he listened to our Lady speak to him.

Our Lady bent a little towards Bruno and said these words to him, “I am she who is related to the Divine Trinity. I am the Virgin of Revelation. You have persecuted me, now is the time to stop! Come and be part of the Holy Fold which is the Celestial Court on earth. God’s promise is unchangeable and will remain so. The nine First Fridays in honour of the Sacred Heart, which your faithful wife persuaded you to observe before you walked down the road of lies, has saved you.” Our Lady continued to instruct Bruno as she said,“Live the divine doctrine. Practise Christianity. Live the Faith….The Hail Marys that you pray with faith and love are like golden arrows that go straight to the heart of Jesus,” and, “Pray much and recite the Rosary for the conversion of sinners, of unbelievers and of all Christians.”

Bruno was stunned at her words and a transformation began to take place within the heart of this man who had been driven by hate but had now been touched by Divine Love through the help of Our Lady. Bruno’s heart began to beat with the chorus of love rather than the loud and raucous diatribe of hate, a miracle had happened within the soul of this one man which would affect his life forever more.

Our Lady also had more messages for this simple man, “I promise this special favour: With this sinful soil (the soil of the grotto) I shall perform great miracles for the conversion of unbelievers and of sinners…..Science will deny God and will refuse His calls.” Our Lady then spoke of her Assumption into Heaven, “My body could not and did not decay. I was assumed into Heaven by my Son and the angels.” The Blessed Mother also instructed Bruno with a special message for the Holy Father himself, “You must go to the Holy Father, the Pope, the Supreme Pastor of Christianity, and personally tell him my message. Bring it to his attention. I shall tell you how to recognize the one who will accompany you to see the Pope.” 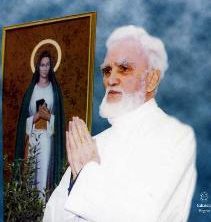 After this message Our Lady disappeared leaving a pungent scent of roses, Bruno was almost in shock at what he had seen and heard, he would never be the same again. Upon returning home, Iolanda could smell the scent of roses and when she enquired the children blurted out that they had seen a most beautiful lady, Iolanda with tears in her eyes forgave her husband as Bruno begged her forgiveness for his vicious behaviour towards her and their children.

Bruno was indeed a changed man and he with his entire family re-converted back to the Catholic Faith which filled his wife’s heart with great joy. Never again would Bruno raise his hand in violence against his family.

It would take two years before Bruno could fulfill Our Lady’s request when he and a group were invited to pray the Rosary in private with Pope Pius XII. After completing this most holy prayer the Pope then asked if anyone wished to speak with him. Bruno immediately raised his hand and with great sorrow he knelt before the Pope and begged his forgiveness for his years of hatred and his intention to kill this holy man of God, the Pope unhesitatingly gave Bruno his forgiveness.

Even though over time many would try and use this simple man for their own purposes, Bruno has maintained what he saw and what our Lady revealed to him. He also continued to remain a devout Catholic with a sincere devotion to the Mother of God.