My Time in Hell

by Matthew and Nancy Botsford 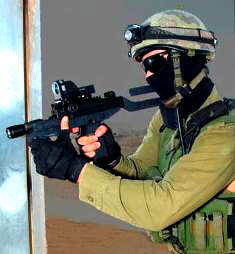 “Nine-millimeter shots rang out from every direction. The shooter stood on the corner of the cracked concrete sidewalk. He squeezed the trigger of an UZI machine gun, anger pumping through his veins, spraying bullets into the crowd outside of the building. Matthew was hit from behind, the 9 mm bullet piercing the back of his head, instantly knocking him to the ground....dead.”

This was how my wife Nancy described what occurred on that fateful day in her book, “A Day in Hell; Death to Life to Hope” (Tate Publishing).

It was March of 1992 when, on the streets of Atlanta, Georgia, and waiting on a taxi, that I physically died from a 9 mm bullet to my head. I did not know Jesus. He was not my Lord and Savior. I believed there was a God and that Jesus existed, but I had no intimate relationship with Him. Therefore, upon my death on that terrifying night, Hell was my final destination.

When I later began studying the Bible, I found this verse in John 14:6 ESV, which said, “Jesus said to him, I am the way, and the truth, and the life: no one comes to the Father, except through Me.”

Matthew 10:28 (ESV) cites the existence of Hell and the need for a healthy fear of the Lord, and says, “And do not fear those who kill the body but cannot kill the soul. Rather fear him who can destroy both soul and body in hell.”

And finally Matthew 25:41 makes reference to Hell as the destination for those He never knew, and reads, “Then he will say to those on his left, ‘Depart from me, you cursed, into the eternal fire prepared for the devil and his angels.” 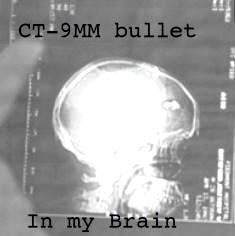 I felt an incredibly painful hot pierce in to the top right rear of my skull and a scorching searing pain into and through my very brain where the bullet came to rest in my right frontal lobe (It remains there to this day).

Immediately, I shifted from the temporal realm I lived in, to the eternal realm of Hell. I saw myself experientially (meaning it was actually myself as opposed to viewing myself from an outside vantage point) in bodily form suspended crucifixion style in midair in the blackness of Hell, arms outstretched, shackled with ancient black chains clasped about my wrists and my ankles, suspending me over a deep seemingly bottomless glowing red abyss.

This chasm was contained inside of a massive cavernous dome, underground cave-like with fiery hot stalactites hanging from the blackish-red jagged dome-like ceiling and their floor based counterparts-stalagmites rising from the rough flowing glowing floor as what seemed to be lava flowed about them, encircling their bases and rising to the tip-top of some.

I saw various shelves about the walls of the cavern and four legged hunched over creatures scurrying about in agony themselves, attempting to keep clear of the flowing lava. Some were successful in their attempts while others were not and boiled in lava unto their agonizing demise.

The creatures appeared as if they could walk upright on their rear appendages but their agonizing existence had burdened them towards the ground to all fours. Black/grey smoke billowed up from the “lava” flow seemingly carrying in it the very souls of the lost—screams emanating from the depths of this very “flow”. None of the screams were intelligible...just screams of loss, pain and anguish.

Some were horrific guttural sounding and others were higher pitched, but all were full of severe torment and pain. It was obvious, by the countless screams I heard, I was not down there alone, yet isolated, I was in my own torment.

This lava flow, made of sulfur and brimstone, made its way towards where I dangled only to drop down into the abyss beneath me, but before it did, globules of searing hot lava splashed upon my shins and feet burning off my flesh straight to the bone. I felt my flesh burn off. I smelled my own flesh searing and burning away. Afterwards, I could see my bones clean from flesh and blood then, in the next instant and as painful as the burning off was, I saw and felt my flesh reform only to be burned off again and again and again.

Demons came about me resembling a black cloak restricting my view and existence to that of a black cell; a chamber with no ceiling or floor nor any sides but a constricting demonic cell of palpable blackness like liquid ink, only demonic, icy cold, and evil, in all appearances and feel. 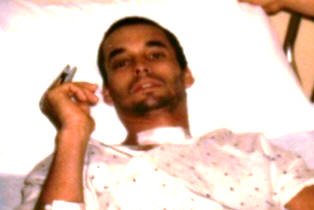 Hopelessness squashed my existence. I saw dark oval eyes looking at me...piercing eyes that gazed right into my very being as if they were reading my whole life story….evaluating me, judging me, and mocking me on all counts. I watched countless numbers of these evil eyes dart back and forth at lightning speed, some disappearing and then the same or more reappearing. I somehow knew when different eyes would approach me through the cloak of this ominous darkness, or if they remained the same. They approached to me in pairs, yet each individual eye was its own entity.

Some came really close to my face at lightening speeds, while others kept at a distance. Some moved tauntingly slow at my face all the while I hung in full frontal and back nakedness; not ashamed, but fully uncovered...unclothed. I could see some of the faces of these demons, and bodies…short and stout covered with scales and horns of varying numbers, sizes and lengths upon their heads, denoting their levels of authority in Satan’s realm.

Not one had seven horns, denoting perfect authority and might that is reserved for the Lamb (see Revelation 5:6 ESV). Sometimes a talon-ed scaly hand grabbed out towards me from the blackness at lightning speed and then vanished just as quickly. I could make out teeth in what seemed like mouths on some, wicked in their appearance. The teeth were of various sizes and sharpness with deeply ingrained black lines from base to tip. I could see in some of their gaping mouths, remnants of what looked like flesh and bone. I knew they were behind me too. I just wasn't able to see behind me, but I could feel their gaze penetrating my very being.

I felt their gaze at my back side and then the peeling off of my skin resulting in tremendous pain. I heard the sound of my skin being ripped off in ribbon-like fashion.

Every time these eye demons would get close, I smelled their stench like rotten carcasses or rotten flesh. Over and over and over this repeated itself. There was to be no end to the torment. I understood this was to be an eternal existence for me.

As I said in the beginning, I had no relationship with Jesus therefore Satan legally had right to bind me until Judgment Day (See Revelation 20: 13-15 ESV), which says, “And the sea gave up the dead that were in it; and death and Hades gave up the dead that were in them: and they were judged each one of them according to what they had done. Then death and Hades were thrown into the lake of fire. This is the second death, the lake of fire. And if anyone’s name was not found written in the book of life, he was thrown into the lake of fire.”

Maybe you are asking at this point, the Word says in Hebrews that man is appointed unto death once then the judgment, yet here you are back on earth? What’s up with that? Well let me share quickly how I was rescued. 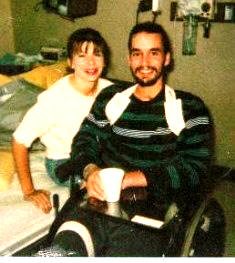 At this time, my wife Nancy did not know Jesus either, so while tremendous pressure was being put on her by the medical staff to sign me off life support, and she was dealing with aggressive organ harvesters toting organ coolers et al, and succumbing to her own “darkness” with the advent of me lying there comatose, Jesus sovereignly came to her while down a dark hallway in the hospital and “touched” her shoulder, giving her all authority in Heaven and on earth to make a heartfelt petition for my life and God heard it, receiving it from His Son Jesus, announcing in the Heavenly courts “... this changes things”.

In my realm in Hell, I saw a massive finger begin to protrude in from the outside which led into the entirety of a man’s hand. A right hand cracked and creviced like the palm of any man’s hand, yet of great age and massive in appearance. This hand of God methodically descended towards me and grasped me about my waist, instantaneously causing the shackles to drop off, demons to flee, blackness, fear and hopelessness to be vanquished, heavenly music, brilliant white light, and finely ingrained glistening golden white feathers filled the vast cavernous area.

Then the most astounding thing took place. I heard a voice of thunder, a bolt of lightning and mighty rushing waters, simply say; “IT’S NOT YOUR TIME!”. 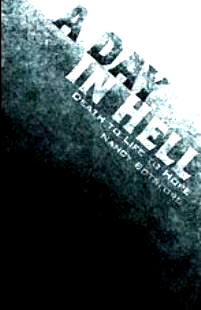 Yes, Hell is real and I have given you a firsthand account of its eternal horrors. This article is but a short testimonial to a much longer narrative and to many with questions regarding God’s love and how that equates with the existence of Hell, therefore I would be remiss if I did not cite my wife’s book entitled, “A Day in Hell; Death to Life to Hope” chronicling our true life testimonial experience of death, Heaven & Hell, Divine Justice, Grace and Mercy, the Fathers Love and the revelation of the Great Mystery through Christ alone found in Ephesians 1: 9-10.

Please remember what is written in 2 Peter, chapter 3, verse 9, that God desires none should perish but come to everlasting life through repentance. What is it in John 14:6 that is so misunderstood these days? Jesus is saying that if you want to get to God in Heaven and have eternal life, you have to go through Him.

Since this great miracle occurred, Nancy and I have begun a ministry called "Seeds of Love", We at Seeds of Love Ministries are an evangelistic itinerant ministry released by God and His Son Jesus and lead by the Holy Spirit, formed in 2004 ordained under Morningstar Fellowship of Churches, affiliated with Toronto Airport Christian Fellowship Partners in Harvest, and attend Saint Simons Christian Renewal for the sole purpose of Isaiah 61:1-3 ESV “The Spirit of the Lord GOD is upon me (us)...”

And according to Romans 10:8-9 ESV, “The word is near you, in your mouth and in your heart” (that is, the word of faith that we proclaim); because, if you confess with your mouth that Jesus is Lord and believe in your heart that God raised him from the dead, you will be saved.”

And 2 Peter 3:9 ESV says, “The Lord is not slow to fulfill his promise as some count slowness, but is patient toward you, not wishing that any should perish, but that all should reach repentance.” 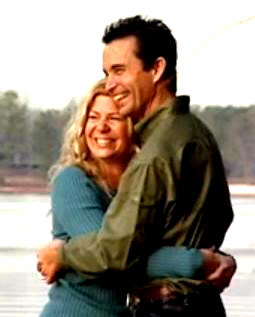 Prophecy, miraculous signs and wonders always follow their ministry of the whole Word of God, calling people into their God-ordained purposes for their lives and setting them anew, healed and refreshed in the love of God.

Our theme question to all of you is: Where Will You Spend Eternity?™

Matthew and Nancy Botsford can be contacted via their ministry website or by e-mail at chiefersone@gmail.com where you can request interviews, bookings, and church or group gatherings.

The book, “A Day in Hell; Death to Life to Hope” can be found at Christian bookstores, Barnes and Noble bookstores or ordered online at tatepublishing.com and also atwww.Amazon.com .

To see a CBN documentary on our story, please go to:www.cbn.com

** You may republish this story with proper attribution, as per the original website.


Our Lady of Zaro
✞ My Heart is Torn


Marcos Tadeu
✞ My messages and my tears will begin to diminish