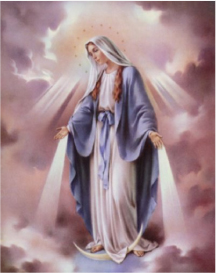 My Dear Friends in Jesus and Mary, it has been awhile since I have shared with you.

Now, I have a strong longing to reply to the numerous emails that I have received from so many of you — from countless holy homes and hearts throughout the world. Many of you are concerned (and rightly so) as you witness the unfolding national/world developments. We all seek answers and direction as to what we need to do spiritually and physically to prepare and respond to Our Lord and Blessed Mother as events continue to unfold.

In response to what many of you have asked, as to “why have you stopped writing the messages and teachings?” — I was spiritually directed to wait and allow God’s children to digest information and find individual answers, and to pray that each of you would see what is occurring before our eyes relative to your individual lives and situations. The Lord wants each of us to grow spiritually and become His warriors, so that when the time comes to “move, act or stay”, we will be open to His message and direction.

The first step is always to seek a sincere, deep and open relationship with Our Lord Jesus Christ. Seek our Blessed Mother, who is always with us, and we will be protected under Her Immaculate Heart.

At this time, the completion of Matthew Chapter 23 is upon us.

Spiritually, I discern one of our tasks now to be from Ezekiel 33: 1-17

1 And the word of the Lord came to me, saying: 2 Son of man, speak to the children of thy people, and say to them: When I bring the sword upon a land, if the people of the land take a man, one of their meanest, and make him a watchman over them: 3 And he see the sword coming upon the land, and sound the trumpet, and tell the people: 4 Then he that heareth the sound of the trumpet, whosoever he be, and doth not look to himself, if the sword come, and cut him off: his blood shall be upon his own head. 5 He heard the sound of the trumpet and did not look to himself, his blood shall be upon him: but if he look to himself, he shall save his life. 6 And if the watchman see the sword coming, and sound not the trumpet: and the people look not to themselves, and the sword come, and cut off a soul from among them: he indeed is taken away in his iniquity, but I will require his blood at the hand of the watchman.

7 So thou, O son of man, I have made thee a watchman to the house of Israel: therefore thou shalt hear the word from my mouth, and shalt tell it them from me. 8 When I say to the wicked: O wicked man, thou shalt surely die: if thou dost not speak to warn the wicked man from his way: that wicked man shall die in his iniquity, but I will require his blood at thy hand. 9 But if thou tell the wicked man, that he may be converted from his ways, and he be not converted from his way: he shall die in his iniquity: but thou hast delivered thy soul.

10 Thou therefore, O son of man, say to the house of Israel: Thus you have spoken, saying: Our iniquities, and our sins are upon us, and we pine away in them: how then can we live? 11 Say to them: As I live, saith the Lord God, I desire not the death of the wicked, but that the wicked turn from his way, and live. Turn ye, turn ye from your evil ways: and why will you die, O house of Israel?

12 Thou therefore, O son of man, say to the children of thy people: The justice of the just shall not deliver him, in what day soever he shall sin: and the wickedness of the wicked shall not hurt him, in what day soever he shall turn from his wickedness: and the just shall not be able to live in his justice, in what day soever he shall sin. 13 Yea, if I shall say to the just that he shall surely live, and he, trusting in his justice, commit iniquity: all his justices shall be forgotten, and in his iniquity, which he hath committed, in the same shall he die. 14 And if I shall say to the wicked: Thou shalt surely die: and he do penance for his sin, and do judgment and justice, 15 And if that wicked man restore the pledge, and render what he had robbed, and walk in the commandments of life, and do no unjust thing: he shall surely live, and shall not die. 16 None of his sins, which he hath committed, shall be imputed to him: he hath done judgment and justice, he shall surely live.

17 And the children of thy people have said: The way of the Lord is not equitable: whereas their own way is unjust.

Friends, the above Scripture is for every one of us. We have a responsibility to share with our family, friends and everyone the urgent information on the current times. Do not allow the spirit of fear or anxiety keep you from being the Guard and Watchman for our families and our country.

The tempest and the sword are imminent and world-wide, taking place in all areas and countries of the world. I ask you to take note of the last meeting of world leaders that just took place in Panama. What was their agenda? It is not a “conspiracy” in the true sense, but the fruits of Satan’s plan to enslave us humans- a plan that has been in motion for over 300 years.

I have been praying and discerning regarding developing events as you read this writing. The world is increasingly governed by anger, hate, and pride; evil rules around us. The chief exorcist from the Vatican, Father Gabriele Amorth posted the following incisive comment recently on Facebook: “Things first happen in the spiritual realms, then they are made concrete on this earth,” he said in an April 8th post on the social media website. Father Amorth said, “there are only two spiritual realms: The Holy Spirit and the demonic spirit.”

Cardinal George, former Archbishop of Chicago who was much admired for his insight and courage, died on April 17thof this year. In a column in 2012, he prophetically stated “I expect to die in bed, my successor will die in prison and his successor will die a martyr in the public square. His successor will pick up the shards of a ruined society and slowly help rebuild civilization, as the church has done so often in human history.”

The events currently occurring and about to occur have been carefully planned in the demonic world for over 300 years; know that all their plans are in place and ready to be exposed. If you desire to know more as to how this travesty started, I will be happy to send you the history of its beginning---from now to the present. My email is johnmartinez1952@austin.rr.com

I ask you to DISCRIMINATE and read the following links very carefully. They will give you information of some of the major, bold ways Satan/evil is beginning to manifest his malevolent plans and strategies.

One way we are seeing this expression of evil is operation “Jade Helm”, where the US “military” is conducting exercises that they claim to be routine practices.

Junction, Texas (only 60 miles from my home) and several other communities in Texas were placed under military control, although the population was told that it was all pretend drills. Texas, along with various chosen states, have been labeled as “hostile territory”.

This quote from a Texas Big Spring resident describes the surreal atmosphere: “This is happening now. The troops are already arriving in April for something that doesn't happen until June! Troops are already jogging in formation through the streets of Big Spring holding AR 15s right now! Very Weird! “

Several media networks have noted that the military has, at least temporarily, delayed the operation based on the widespread outcry, including clamor in Stars & Stripes, Army Times and the Houston Chronicle. It’s also worth noting that the military has routinely launched exercises in the past in which regions of the United States are identified as hostile for the purpose of “training”.

Similarly, consider Bold Alligator, a naval exercise in which thousands of marines and sailors were involved. The most recent version was launched last fall, and included amphibious landings to prevent “insurgent” groups in the fictional country known as Garnet — Georgia and part of Florida in real life — from launching attacks.

Next, consider the closing of Five Walmarts across different states, suddenly and without notice to employees, at the same time:

The self-declared Islamic State, also known as ISIS and ISIL, has raged across huge swaths of Syria, Iraq, even Africa, and has repeatedly threatened the American homeland. Apparently, they are closer than we think!

Happily, in the midst of our turmoil, there are anointed children of God who have been given the knowledge and wisdom to share God’s word, to direct us and to warn and prophesy. One of these truth-speakers is Charlie Johnston, and I highly recommend you read his articles, especially the current writings on current and future events: https://charliej373.wordpress.com/

However, let’s all exercise much thoughtfulness and discrimination in seeking “truth”, and guard our minds and hearts, as there are certainly false seers and visionaries. Sadly, some may be seeking and building their own kingdom, and may become angry when questioned. Some may want attention or may have undue pride. I highly encourage you to read this article from Spirit Daily, written by Michael Brown: “BEHIND 'FALSE' APPARITIONS CAN BE NOT JUST DELUSION BUT INTENSE EVIL SPIRITS”. http://www.spiritdaily.com/ .

Let us stay strong, courageous and united in prayer to our Jesus and Mary,
John

Addendum to “It has Started”

It is very difficult to understand what is NOW happening in this Country. I personally feel an obligation to be the Watchman and bring attention to the changes happening throughout the world and especially in our beloved Country the United States of America. Many of us saw this coming and it is my responsibility to warn as many as possible. This is REAL not a movie or an exercise.

I ask each one of you to DISCERN for yourself and pray. Watch the You-TUBE below and come to your own conclusion. You will not see this on the Main Media. This Operation Jade Helm is only 60 miles from my home as the Texas City of Junction is already under seize. My friends have personally seen over 40-50 Black Hawk helicopters fly at night over Brady, Texas I have personally seen convoys of Humvees, sealed trucks, tanks mounted on trucks and a lot of military equipment on US Hwy IH-10 going towards Junction City.

I will send you this Demonic Plan that started over 300 years ago. Email me at johnmartinez1952@austin.rr.com

Warning: This Video Will Shock You! Are You Ready? 2015 BIGGEST EVENT IN HISTORY https://www.youtube.com/watch?v=h0PuGvEwwkA

Jade Helm and Martial Law on America! Wake the XXXX Up Darn-it!
https://www.youtube.com/watch?v=7CzB_AM9y5w


Eduardo Ferreira
✞ Message from Our Lady the Mystical Rose and Queen of Peace
Giselle Cardia
✞ The Times Are Accelerating
MatthewSix25to34
✞ I am back and sharing His word again!
Medjugorje
✞ Message to Marija
Shelley Anna
✞ This is Satan's Hour to Act
✞ Jesus is the Light of the World
The Webmaster
✞ We are struggling again...


Enoch
✞ The Holy Rosary is the most powerful spiritual weapon
Giselle Cardia
✞ Put Your Heart Into Prayer
Linda Noskewicz
✞ Your Trust in Me will be Tested Hardily
Pedro Regis
✞ A Time of Great Confusion
✞ Jesus, the Living Bread
Valentina Papagna
✞ Latest Messages
Valeria Copponi
✞ Have Respect for My Church


Christina Gallagher
✞ My Immaculate Mother will rescue the remnant