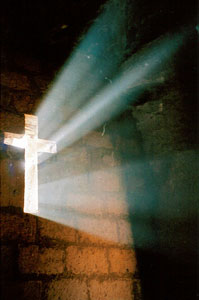 MODERN mystics and seers tell us that after the so-called "illumination of conscience," in which everyone on the face of the earth will see the condition of his or her soul (see The Eye of the Storm), an extraordinary and permanent sign will be given at one or many apparitions sites.

There is coming the great moment of a great day of light. The consciences of this beloved people must be violently shaken so that they may "put their house in order" and offer to Jesus the just reparation for the daily infidelities that are committed on the part of sinners… it is the hour of decision for mankind. —Maria Esperanza, Antichrist and the End Times, Fr. Joseph Innanuzzi, Page 37

This "hour of decision" will be reinforced with some kind of permanent miracle. I believe it may be a sign which involves the Blessed Mother.

A great sign appeared in the sky, a woman clothed with the sun, with the moon under her feet, and on her head a crown of twelve stars. She was with child and wailed aloud in pain as she labored to give birth. (Rev 12:1-2)

Two prominent souls in the Church foresaw God permitting a sign, both Marian and Christological in nature, which will be given for the conversion of souls before a great chastisement originating from God:

My right hand prepares miracles and My Name shall be glorified in all the world. I shall be pleased to break the pride of the wicked… and much more admirable and extraordinary will be "the event" that will come out of our encounter… two glorious thrones will arise, one of My sacred Heart and the other of the Immaculate Heart of Mary. —Servant of God Marthe Robn (1902-1981), Antichrist and the End Times, Fr. Joseph Iannuzzi, p. 53; St. Andrew’s Productions

I saw a shining red heart floating in the air. From one side flowed a current of white light to the wound of the Sacred Side, and from the other a second current fell upon the Church in many regions; its rays attracted numerous souls who, by the Heart and the current of light, entered into the side of Jesus. I was told that this was the Heart of Mary. —Blessed Catherine Emmerich, The Life of Jesus Christ and Biblical Revelations, Vol 1, pp. 567-568.

Thus the Sign appears Eucharistic in nature. Perhaps St. Faustina saw this as well as part of the miracle of Divine Mercy which is coming upon the earth:

Whatever form it takes, I believe it is precisely this miracle which will, at the same time as producing further and numerous conversions, give rise to the false signs and wonders which Satan will counter with to deceive many, and even explain away the supernatural origin of the Great Sign. Note what occurs immediately after the sign of the "woman clothed with the sun… with child":

Then another sign appeared in the sky; it was a huge red dragon, with seven heads and ten horns, and on its heads were seven diadems. Its tail swept away a third of the stars in the sky and hurled them down to the earth. (Rev 12:1)

I have often written that I believe the universal Church is presently in the Garden of Gethsemane (a perpetual place of sharing in the sufferings of Christ).

The Church formed at the cost of your precious blood is even now conformed to your Passion. —Psalm-prayer, Liturgy of the Hours, Vol III, p.1213

If that is so, the illumination of conscience and Great Sign can be seen in that context (a small picture within the larger picture of the Passion) in the following way…

There is a kind of illumination of conscience when Jesus reveals His divinity to the guards of the chief priests in the Garden shortly after His agony:

The retinue which came to seize Christ are themselves seized with some kind of fear and awe as Jesus identifies Himself as Yahweh, which translated, means "I AM."

This is followed by a great miracle:

Then Simon Peter, having a sword, drew it and struck the high priest’s slave and cut off his right ear. But Jesus said, "No more of this!" And he touched his ear and healed him. (John 18:10; Luke 22:51)

Then followed the persecution and passion of Jesus.

There is coming a moment when God will illumine our consciences and we will understand Jesus to be "I AM," our God and savior. This will be followed by a Great Sign in which many will be healed, both physically and spiritually. Most important, spiritual hearing will be restored so that the voice of the Great Shepherd is heard.

The response to this Sign will determine, say the seers, the extent and depth of the following chastisement which is necessary to purify the world—the beginning of that fearsome and awesome Day of the Lord.

It’s not going to be the end, and its going to happen pretty soon. It’s going to renew us completely… He is coming—not the end of the world, but the end of this century’s agony. This century is purifying, and after will come peace and love. —Maria Esperanza, The Bridge to Heaven, Spirit Daily Publications, 1993.

Read On: The Ultimate Deception


Miscellaneous Messages
✞ I will choose those who will Battle this Army
Shelley Anna
✞ Satanic Activity will be Heightened!


The Webmaster
✞ A String of Misfortunes